The National Cadet Corps (NCC) is the youth wing of the Indian Armed Forces with its headquarters in New Delhi, India. It is open to school and college students on voluntary basis as a Tri-Services Organisation, comprising the Army, the Navy and the Air Wing, engaged in developing the youth of the country into disciplined and patriotic citizens. The soldier youth foundation in India is a voluntary organization which recruits cadets from high schools, higher secondary, colleges and universities all over India. The Cadets are given basic military training in small arms and drill. The officers and cadets have no liability for active military service once they complete their course.

The Rashtriya Indian Military College (RIMC) is a military school for boys and girls situated in Doon Valley, Dehradun in India. The RIMC is a feeder institution for the National Defence Academy, Indian Naval Academy and subsequently the Indian Armed Forces. Rimcollians, the name by which alumni of the RIMC are usually denoted, have gone on to hold the highest ranks in the Army, Navy and the Air Force of India, Pakistan and Bangladesh.

The Indian Military Academy (IMA) trains officers for the Indian Army. Located in Dehradun, Uttarakhand, it was established in 1932 following a recommendation by a military committee set up under the chairmanship of General Sir Philip Chetwode. From a class of 40 male cadets in 1932, IMA now has a sanctioned capacity of 1,650. Cadets undergo a training course varying between 3 and 16 months depending on entry criteria. On completion of the course at IMA cadets are permanently commissioned into the army as Lieutenants.

Captain Manoj Kumar Pandey, PVC was an officer of the Indian Army who was posthumously awarded India’s highest military honour, the Param Vir Chakra, for his audacious courage and leadership during the Kargil War in 1999. An officer of the 1st battalion, 11 Gorkha Rifles, he was martyred in battle on Jubar Top of the Khalubar Hills in Batalik Sector of Kargil.

Admiral Arun Prakash, PVSM, AVSM, VrC, VSM is a former Flag Officer of the Indian Navy. He served as the Chief of the Naval Staff from 31 July 2004 to 31 October 2006 and as the Chairman of the Chiefs of Staff Committee from 31 January 2005 to 31 October 2006. He is one of India’s most decorated naval officers.

The Indian Naval Academy is the defence service training establishment for officer cadre of the Indian Naval Service and the Indian Coast Guard, located in Ezhimala, Kannur district, Kerala. Situated between Ezhimala hill and the Kavvayi backwaters, INA has a 7 kilometre beach front on the Arabian Sea. It conducts basic training for all officers inducted into the Indian Navy and Indian Coast Guard. It is Asia’s largest, and the world’s third-largest, naval academy. National Defence Academy (India)

The Officers Training Academy (OTA) is a training establishment of the Indian Army that trains officers for the Short Service Commission (SSC). The 49-week course at the OTA prepares graduates for all branches of the Army, except for the Army Medical Corps. Established in 1963, the first academy is located in Alandur, a southern neighbourhood of Chennai. A new academy was set up at Gaya in 2011; but was given the go-ahead in December 2019 to be disbanded. National Defence Academy (India)

Air Chief Marshal Arup Raha, PVSM, AVSM, VM, ADC was the 24th Chief of the Air Staff of the Indian Air Force and served from 31 December 2013 to 31 December 2016. He was also the Chairman of the Chiefs of Staff Committee, a post occupied by India’s senior-most military officer, who advises the government and ensures jointsmanship in the armed forces. National Defence Academy (India)

College of Air Warfare (CAW) is a defence service training institution of the Indian Air Force. The college conducts courses and programmes in the art of Joint Warfare, with special emphasis on employment of Air Power. The functional and the administrative control of the college is with the Training Command of the IAF. The current Commandant of the College is Air Vice Marshal Dilip Kumar Patnaik who took over on 1 October 2019 from Air Vice Marshal S K Jha.

Sainik School Satara is one of the 33 Sainik Schools of India. It is a purely residential school for boys. The medium of instruction is English. Established by Government of India on 23 June 1961 at Satara. It is affiliated to Central Board of Secondary Education and is a member of Indian Public Schools Conference (IPSC).It also has Primary Sainik School Satara attached to it. National Defence Academy (India)

Air Marshal Jasbir Walia PVSM, VM, VSM, ADC was the commander-in-chief of Strategic Forces Command of the Indian Armed Forces from 1 August 2016 to 31 March 2019. Commissioned into the Indian Air Force in 1979, Walia has held several important appointments as a commanding officer, at Air Headquarters, at the headquarters of various commands of the Indian Air Force (IAF), as an attaché, and has also served as an instructor and as a deputy commandant of various training academies. 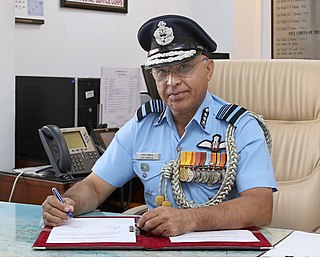 Air Marshal Anil Khosla, PVSM, AVSM, VM, ADC is a retired Indian air force officer who served as 42nd Vice Chief of the Air Staff (VCAS) of the Indian Air Force. He assumed the office on 1 October 2018 and handed over on 30 April 2019.

Military Institute of Technology (MILIT), Pune is a tri-services training institution of the Ministry of Defence of the Republic of India. It trains selected officers of the three services of Indian Armed Forces and officers from friendly foreign countries for command and staff appointments. It conducts the prestigious Defence Services Technical Staff Course (DSTSC) for the Indian Army, Indian Airforce and Indian Navy Officers. The institute has a faculty of highly qualified senior officers from all three services and renowned scientists who provide specialised training on cutting-edge futuristic technologies, advanced miltary warfare, latest procurement procedures and operational logistics to the student officers. On successful completion of the course the officers are awarded with a Degree of Msc in Military Technology from Pune University. Officers in the service bracket of 9 to 14 years attend this course. Mostly officers attending this course are of the rank of Major or Lt Col. Aim of this course is to train these officers for holding senior command and important staff appointments in the future.